Thank you to all my supporters

Thank you for everyone's concern about my health and safety. I am healing up just fine. As proof, I went for a swim for an hour today. Everyone is asking whether I will try again next year. We will have to see what happens with Covid. My camera was lost in the high waves but I do have a couple of pictures from a phone that I uploaded for you. For those of you still thinking about a donation, the donation goes to NADY and they know that all donations that came in in August and September are for my swim. I hope it adds up to a new piece of equipment for the Trackers. Thank you to everyone who donated.
1 comment:

The boats drove us over to beautiful Campbell's Bay. It looks like a deserted Algonquin beach with beautiful cliffs on either side. It was nice and fairly flat in the beginning hour. The north wind whipped up, much stronger than predicted. The spray literally whipped by horizontally above the water. The waves were hard to swim in because they were broadside and my shoulders started hurting. This struggle chilled me. This lasted almost 2 hours. I joked that it would start snowing soon, it looked so bad and the temperature fell. Then it became a different lake, calm and almost flat. The sky was overcast and I was counting the hours until the sun was forecasted to come out to warm me up. Swimming was pleasant other than the cold wind on my back until we were approaching the Manitou islands when the waves were coming from several directions. This slowed me down and chillled me too. But then behind the shelter of this ring of islands, an ancient volcano, it was calm and warm and sunny. It was a little oasis. Coming out of the Manitous, the wind picked up, totally in my favour. The water was pretty flat and my speed really picked up. Then, the sun set and the waves started getting bigger and bigger. My son started taking on water in the kayak to the point where he had to go back to the boat. At the same time, the inflatable boats were having great diffulty in the waves. They were 8-10 feet and breaking over me. The big boat in the rear stayed with me but he couldn't get any closer than 30 feet or else he'd run me over. I was having trouble hearing them. When I passed our inflatable upside down, I knew the conditions were really bad. (I later learned that the flip over happened near the boat and she was rescued right away.) I decided getting out was the safest thing to do. Even that was tricky, it took 3 tries for them to throw me a rope. I later heard that the winds were 65 km an hour, that's gale force. I was so glad to hear that everyone was Ok, that disappointment at not finishing was not so important. Lake Nipissing threw everything she had at me. A very challenging lake. I want to thank my Captains, Andy Geseron and Tim Shurgour. They were beyond awesome. And my Swim Master, Shelagh Freedman, who kept me safe. And my faithful crew who have been with me for so many swims. And all the wonderful people at the Nipissing Trackers and Nipissing Association for Disabled Youth, Anne and Rick Taylor and Jim Stewart. And finally to the 2 dozen people who came down to the beach to cheer me on
1 comment:

Approximately 1.6 km from shore waves were 2 to 3 meters and it became unsafe to continue the swim so it was called. This was not forecasted. All are safe but some equipment was lost. Marilyn is warm and resting. More tomorrow!
3 comments:

She is giving this swim her best! She does not want to let the Trackers down! About 3.2 km left. Stroke count 63! She will have nothing left! Marilyn is determined to support the Trackers mission! Thank you for your support!
7 comments:

Left Manitou at 6;30pm with 8km remaining so earliest arrival time is approximately 10:30. Finally wind has shifted to southwest and is pushing her straight to Marathon beach where she trained 4 times in the heart of North Bay. Hope she can swim hard enough to prevent hypothermia.
2 comments:

Marilyn entered Manitou Island sheltered water but has been cold for more than 1 hour. This is where exhaustion, cold water and waves take their toll. Can she finish only time will tell.
2 comments:

We are 3 km from Manitou Is. and Marilyn is staying consistently at 58 to 61 strokes per minute. Visually a circle of rugged tipped islands that bring to mind volcanic activity. In this we will be sheltered from the wind...that keeps on blowing!
No comments:

Marilyn with the Tracker students and volunteers 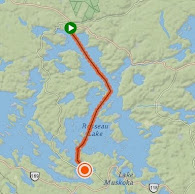 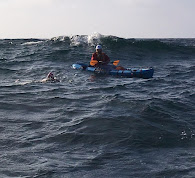 Swimming at dawn past Anacapa Island 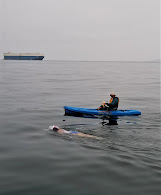 Marilyn with Santa Cruz Island behind her

Sunset over the Santa Barbara Channel

Marilyn sitting in the water after finishing 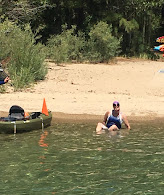 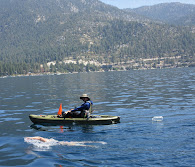 Marilyn and Jodi with the finish 5 km behind them 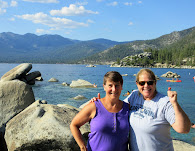 My boat, the Ghostrider

View of the first half of my route across the lake

View of the start